Five times deadlier tha the war is an understatement.
Flu shots are weird and evil and totally unnatural.  An abomination of nature.  And I give myself one every year.

Mainly because of my inner grump – he likes to disprove flu shot myths.   He also doesn’t like to be defeated by a virus that may have started in a steaming pile of poop in Kansas.  Plus I don't want to die !

Number one theory of the flu shot avoiders is delustion that they are “not going to get” the flu.  This is one of my personal favorites, because I have had it myself.   And still see countless patients in as big a state of denial as I was.  We all secretly believe we have some sort of magical invulnerability to the flu.  That we will just naturally be immune.

The most famous flu epidemic all time blows that theory.  It infected…wait for it…40% of “everyone”.    Everyone alive at the time.  Everyone everywhere.  Forty percent of the entire world. 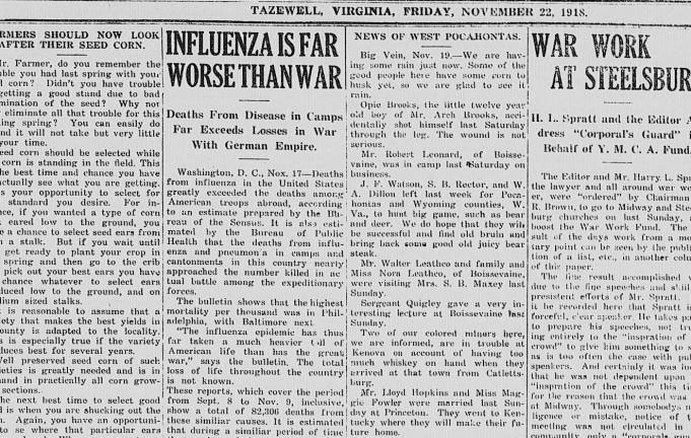 More discussion about how the flu is way worse than the "war to end all wars.."
​ But the flu is a fair bit worse than most people expect.  At best you are going to miss several days of work.  (One of the reasons companies and governments often offer flu shots for free.  They don’t care about health – they are avoiding lost work days. )

At worst you are going to die from the flu.  The epidemic I mentioned above happened just near the end of WW I.   The war killed 700,000 Americans, and approximately 18 million people overall.  The  “purple death” as it was sometimes called killed more soldiers than WW I , WW II, Korea, and Vietnam all combined.

People wore masks to try and prevent spread of the flu
This flu is usually called the Spanish Flu, because Spain was not involved in the war and did not have the same newspaper sensorship as the rest of the war, and therefore was one of the only places that published information about the flu.   ( This censorship is one of the reasons so few people were aware of a flu that was way more deadly than the armed conflict. )

Worldwide the Spanish flu pandemic killed as many as 100 million people.  It may have killed 25 million people within 25 weeks.  Compare this to the HIV epidemic, which has also killed 25 million people, but it took over 25 years.   In October of 1918 the Spanish flu killed 11,000 people just in the city of Philadelphia.   The draft was cancelled for a week in  October because of there were not enough young men left alive to recruit.  The army recorded 8,743,102 lost work days due to the flu.  The Spanish flu outbreak decreased average life expectancy in the US in 1918 by 11.8 years.

This wedding pic was taken in Dec 1918, She died from the flu 8 Mrch 2019
Canada was also infected and affected. Fifty thousand Canadians died in that one flu outbreak.  One Newfoundland outport recorded 780 deaths in a population of 1000. It was the severity of the flu outbreak that made the Canadian Red Cross decide to continue its efforts on into peacetime.   Because of the flu there were no Stanley Cup playoffs in 1918.  Hudson Bay stores remained open but for the protection of customers, staff wore masks. So did employees of the Canadian Imperial Bank of Commerce and telephone workers. In more than 100 prairie towns, passengers were not allowed to de-train unless they promised to stay put for the duration of the epidemic. Some towns like Lethbridge and Drumheller threw up a total quarantine.
​
In Calgary they ran out of coffins.  In many rural areas – with no time to bury the dead – corpses were stashed on the roofs of their owner’s log cabins, out of reach of animals until spring.

After years at the front, returning soldiers could not embrace their loved ones. Anxious wives would meet husbands at the station unable to touch them, or even get near. One, who did, died, shortly after their reunion. Another case poignantly brought home the flu's cruel irony. Airman Alan McLeod of Stonewall, Manitoba became at 18, Canada's youngest Victoria Cross winner. Days after returning to his home town, this young hero, who had shot down three enemy planes and survived a burning plane crash, did not survive the silent killer.

Vancouver also hosted the flu.  Out of every 1000 residents, 23 died of the flu.   Mortality rates were double in those who had a job, and amongst married people.   (Of all the married Vancouverites who died in 1918, half of them died of the flu. )   Strathcona and East Van were the most infected areas.

And the contagion spread rapidly.  According to the Vancouver Sun and Province, on 4 Oct 1918 Vancouver recorded its first influenza death.  By 27 Oct there were 42 deaths in one day. Some people went from completely healthy to completely dead within three days.
Death rates were twice as high in aboriginal peoples and in isolated areas, probably because of lack of exposure to similar flu viruses.  Up to one third of the population of the North West Territories died of the flu.

Spread of the flu to the northern regions may have been hastened by a train taking Canadians up to Alaska as part of the Siberian Expeditionary Force. Spread to the east across Canada may have been hastened by 80,000 Chinese laborers who were transported across Canada to get to the European theatre of war.  Because their final destination was Europe they were exempted from the usual $500 per person “head tax”  required at the time to allow Chinese immigration

A third myth is that flu shots will give you the flu.  I never believed this one, until it happened to me.  I was busy one afternoon shooting vaccine into people and decided to give myself a shot.  The very next day I came down with the flu.  Proof positive that the flu shot is what made me sick.

Except for one glitch – at the last minute I poked the flu shot I had drawn up for myself into a patient, and never did give it to myself.  So I came down with the flu right after I had “almost” given myself the flu shot.  Meaning the timing of when I got tired and achy was pure co-incidence. But if I had given myself the shot I might well have joined the ranks of those who – against all logic - become convinced that the vaccination caused the flu …

There is also the boring scientific fact that every year’s flu vaccine is tested for side effects, and the same number of people imagine that flu shots caused them to have the flu or other side effects as thought that sterile water injections did the same thing.

My final and favorite myth about flu shots is that they “weaken the immune system”.  The exact opposite is actually true – flu shots make the immune system stronger.   The flu shots are the “sparring partner” that the immune system uses to learn about the flu.  To practice on in a safe and controlled way.  So that if the flu does come around the immune system has its “one-two punch” all perfected.    Lack of this sort of practice exposure is one of the reasons that flu epidemics affect aboriginal and isolated communities more severely- they have less “warm up”  flu to prime their immune systems.
​
I still hate flu shots.  Because they are far from perfect, and do have a few side effects.  But when compared to “purple death”  and death in three days,  I think it is the lesser of evils.  So I tolerate flu shots.  Sadly.  Every year.

Flu deaths in Vancouver 1919, Note that most of the areas had not yet been developed.